For this assignment, what we have to do as a outcome is to ‘engrave’ something onto a blue foam. 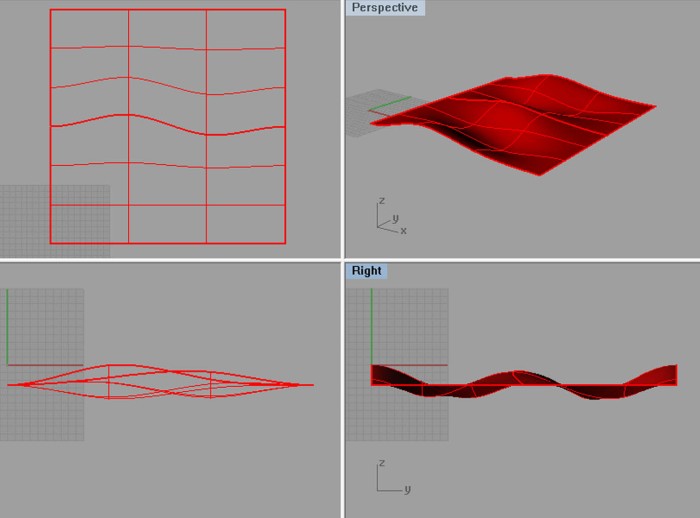 1. First of all, in Rhino, open up the template that Jess gave in class. We’re meant to play around with the height of the wave, but must remain the 4 sides of the wave so that it could be joined perfectly with others. For me, I play around a bit only in the center part of the wave.

2. We have to decide a shape of any picture that we wanted to be ‘engraved’ onto the foam. Either to draw it up yourself in Rhino OR download a pattern you want from the internet, open up in Illustrator, use Live Trace then Embed it, then Ungroup it. Save and then import into Rhino. For my wave, I am looking towards something which is more spiral shape, to create a illusion. Instead of normal round spiral, I selected to use the squarish spiral to match the wave shape. Picture shown above was my first idea of doing my wave, after I done the stimulation with Andrew, the outcome of the wave was too messy and couldn’t pick up what’s happening on the wave. I decided to take away the magenta layer spiral, and then it became my final wave.

3. This is how my final wave look to be sent to the CNC milling machine. I played with different height of the line in the wave, so that I’ll get somewhere which is deeper and somewhere is more shallow cut. Would like to explore the part that sink into the wave, where some part is above, which is not touching/cutting the foam.

4. Time to get the final file stimulated and cut. Made an appointment with Andrew, get in the office with the file ready, stimulation starts! Choosing which tool to use, to create a better illusion. After everything’s decided! Andrew sends the file and save it as a *.ncp file, which is the file that the milling machine reads.

5. This is a print screen of my wave after stimulation done. Can’t wait to get my wave and see how it looks!